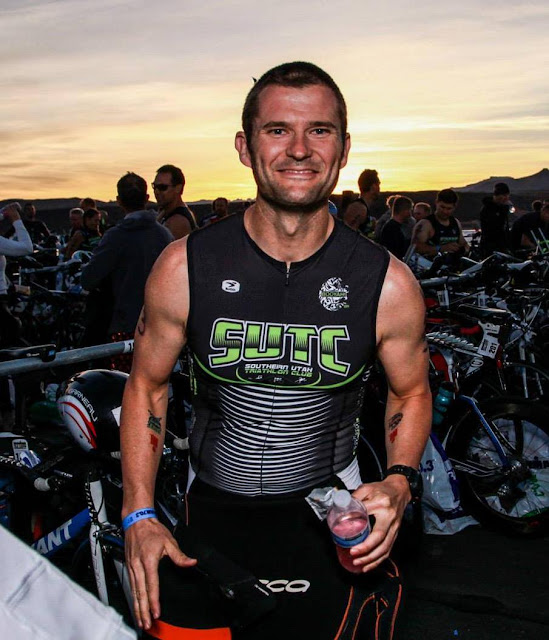 
I’ve never been an endurance athlete, that’s never been one of my strengths. I played your typical fast twitched sports in high school: football, basketball and track. I’m 6’3” and my college football weight was about 235 pounds with muscle.

In 2005 a friend introduced me to triathlon and I got hooked on it. I ended up training and bulking up until I weighed over 250 pounds.
Then I lost some weight and weighed about 220 on race day of the 2010 St George Ironman. I set a goal to be competitive at the half ironman and qualify for Worlds.

In December 2012, I recommitted to losing weight and to get to where I needed to be health wise, because I really wanted to do well at the St George Half Ironman in May of 2013. Our whole family was in Las Vegas on vacation. On Christmas Eve I ate at a buffet and I ate everything I wanted to eat. The next day, Christmas Day, I was as sick as could be. I’d gotten food poisoning. My family was all out doing stuff and I was in a hotel room puking my guts out. All day long, on Christmas, I never left the bed. While there I had time to reflect on things. I decided that I was going to completely change the way I ate, including removing all refined sugars from my diet.

There is actually no way to avoid all sugars because it is the biggest poison in the world and all manufactures put it in their food to make it addictive. So you just do the best you can to reduce that.

I avoided all soda, candy, ice cream and junk food. I was totally done with all that. I also started eating smarter and switched from simple carbs to complex carbs. I switched from white rice to brown and stopped eating white bread and noodles. I ate whole grains instead.  That new way of eating, along with a workout plan made a huge difference. I was able to lose all my extra weight. Right now I weigh 190 pounds instead of 230-250, where I was at the start of my tri career.

My first week off sugar I went through withdrawals and I had to find things to substitute to make it work. I’ve had to educate myself over the past few years to find out what my body is really craving. If you’re craving sugar you probably need more protein.

I try to eat fruit during the first part of the day and vegetables at night. Just like most people I’ll have those cravings at night for something sweet. Most people go right to the ice cream. I had to figure out something else that would work for me. Dried fruit that’s low in acid is one of my substitutes. Or I’ll make a protein shake by blending a couple frozen berries, a banana and milk of some kind. While the rest of the family is eating their ice cream I’m having my treat. When you stop eating sugar you can take weight off and keep the muscle.

It is amazing when you eliminate the sugar from your diet, what it does to you emotionally. The problem with sugar is you have your high highs and your low lows. Without the sugar you still have your highs but your lows aren’t as low. If you eat sugar you will get a short sugar high but then afterwards that crash is so far down.

Now my energy levels are more consistent. That was the biggest thing I noticed by just getting rid of sugar.

The other thing about eliminating sugar and losing weight is that you feel so much better, especially when you’re racing. I can’t tell you how much better of a runner I’ve gotten from being lighter on my feet.

My training is a lot difference. I had some testing done that showed my body burns fat a lot better than it did before. Also, when I go out for an hour training run I can go out with only water. I don’t need any sugar drinks and I can sustain my energy for a longer period of time without that stuff.

In 2014 at the St George Ironman I was able to qualify for the world championships in the half and I went to Mont Tremblant, Canada in 2014. It was awesome to check that off the bucket list. My next goal is to get to Hawaii and race in the big dance, in Kona, and so I’ll keep working at that.

Going off sugar helps me reach my goals. It’s also not just for health reasons. I want to feel the way I do now verses the way I used to feel.

Posted by sandismith at 8:47 PM