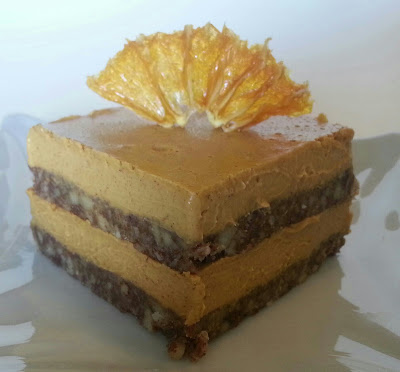 So this is the orange "glass" I made from a dehydrated orange slice. Isn't it pretty? The cheesecake was quite short, more like a bar, since I used a 9"x9" pan. For this photo I stacked two layers and decorated it with the orange. I really need to get a good camera and stop using my phone!

This recipe was adapted from Matthew Kenney's which I believe can be found in his "Everyday Raw" book. Enjoy!

Put the crust ingredients in the food processor and pulse until you get a chunky blob. Press it into a pan and then dehydrate it for one or two days. Remove from the dehydrator and put the pan in the freezer.

Blend the filling ingredients in a Vitamix or Blendtec blender until smooth. Pour over the cold crust and then put the pan back into the freezer. When it is nearly frozen you can slice it cleanly. I like to cut it into individual servings and then store them in the freezer so they are always ready when I want one.

On Monday, September 16, 2013 I woke up weighing 162 pounds!!
That is not only an all time high but it’s more than I weighed the day before giving birth to three of my four children. I wasn’t pregnant with three of them at the same time but you know what I mean. Anyway I also signed up for a fitness/weight loss contest so...let the games begin!

I walked a one mile loop with the dogs in the morning. I spun the pedals on the stationary bike while watching 3 episodes of Gilmore Girls. I barely broke a sweat and Hubby says that’s not working out but whatever.

B: chia seed porridge with peaches and almond milk

S: more of the same porridge

I got in the pool and swam 4,000 yards. It took me an hour and a half and I did a lot of putt-putting around but it felt really good. I thought I took it easy most of the time but an hour after I finished I could really feel it. Tired muscles everywhere. I guess that’s what happens when you stay out of the pool for months on end. (Years, actually)

B: cucumber, celery and green apple juice blended with fruit.

On days four through six I ate about 90% raw and weighed 158 this morning-down four pounds since Monday.  I'm feeling better in the pool and signed up for the Slam the Dam open water swim on Oct 5th at Lake Mead in Las Vegas. I'm excited about that upcoming race and plan to have dropped more weight by then.
Posted by sandismith at 6:46 PM 1 comment: 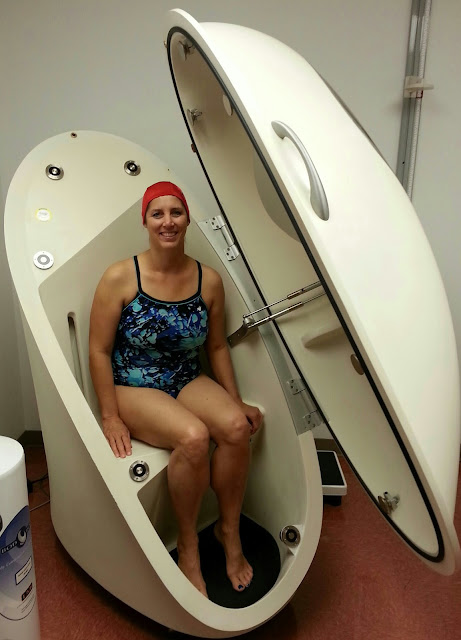 This is me, smiling because I am not being strapped to a chair and S-L-O-W-L-Y lowered into an unforgiving tank of water for an excruciatingly slow, panic filled weigh-in. 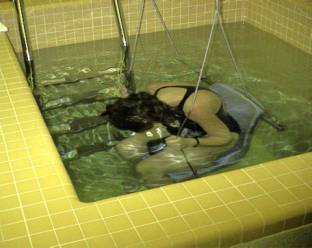 This is not me but this looks just like the contraption I was in years before. This girl looks like she can handle it. In fact she probably got hers done in one try-no problemo. My chair had a seatbelt on it which really sets the imagination on fire. The chair doesn't look as scary in this photo as my chair did in real life. Or maybe it's just me?

When I was a swimmer/student at Brigham Young University back in the 80s, the entire swim team had their body fat tested. At the time, state of the art did not include mathematical equations or pinchy little caliber clips. It only meant one thing: hydrostatic testing (underwater weighing.) The dunk tank reminded me of a carnival booth where some unfortunate soul sat on on a plank and smiled until some paying customer hit the target, thus releasing the plank and dropping smiling participant into a tank of water. Being a lover of all things water related, I never really understood the entertainment factor of trying to get someone underwater. Perhaps if they were a normally well-groomed, heavily made up person who would then resurface looking extremely out of character (think drowned raccoon) I can see it. But still, it’s a stretch.

When it was my turn I figured it would be no problem and climbed into the tank with a big, confident smile on my face. Ten minutes later I wasn’t smiling. I was strapped into a chair-like thingy and told to blow ALL the air out of my lungs before they submerged me.  The mechanical submersion process took a minor eternity and gave me plenty of time to ponder the ramifications of being strapped to a chair underwater. Then I had to hold perfectly still, completely depleted of oxygen, for a full on eternity while the the machine weighed me underwater. I was kindly told beforehand that I could raise my hand should a problem arise. I realized it would be excruciatingly embarrassing if the captain of the swim team couldn’t handle a little underwater weighing and determined not to panic. Ten seconds later my hand was frantically waving in the air with my head tilted back so that my mouth was the first thing out of the water. I would like to say that the I found the emergency ‘raise your hand’ plan quite unsatisfactory since the way up was just as slow as the way down.

The operator asked with concern what was wrong. I had to admit that nothing was wrong and to go ahead and start over. She graciously lied about how lots of people had trouble with this as I hung my head in shame.

I have loved the water since I first laid toes into it and I am extremely at ease while swimming. I am a total water baby. However, if I feel trapped or out of control everything changes. I have always been fiercely afraid of drowning. Being stuck underwater while my lungs burst open (or caved in or filled with water or whatever they actually do when one is drowning) would be the worst way to die. Logically I know that burning up in a fire or being gnawed to death by rats and cockroaches or falling off a cliff would probably be worse. Especially if it was a really high cliff and you had time to think things through on the way down. But what if you were chewed on by a shark and THEN drowned? Wouldn’t that be just as bad? Let me finish that little tangent by saying my irrational fears are quite irrational.

The second time going down in the chair of death I knew what to expect (oxygen deprivation, fear and panic) but told myself to just get it over with and get out of there ASAP. It took a full 15 seconds for me to raise my hand again. I did, however, get it together enough to survive the third dunking and left soon after, giddy with relief. I was also stoked with my results of 11% fat. I weighed 121 pounds and was in the best shape of my life.

Fast forward twenty some odd years where I decided to get my body composition tested once again. No dunk tanks this time. The Bod Pod works on the same philosophy but uses air displacement instead of water. The accuracy is comparable to the dunk tank, which has long been considered the gold standard. After getting into my swim suit and wearing the cap they gave me, I climbed into the pod. After it was closed I sat in the airtight pod and felt a very mild pressure in the very short time I was in there. Easy peasy. Soon after I was given a computer print out with all kinds of information including my body fat: 35%. I wasn’t stoked with those results but they do make a great ‘before’ number. Now I’ve started my ‘after’ program and can’t wait to get into the Bod Pod again. The Bod Pod rocks!


Posted by sandismith at 4:31 PM No comments: